Customers often face a confusing range of products when they’re looking for the right balancing weights. A few years ago lead weights were commonly used on tires everywhere. Due to environmental protection measures lead isn’t suitable anymore in some places in the world. Instead, other sustainable materials have been introduced. This article will introduce you to everything you need to know about the nature of modern balancing weights. 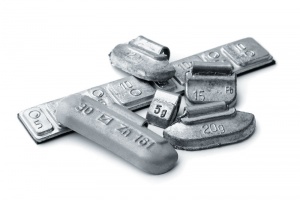 Lead balancing weights, which are still widely used in many parts of the world, are history already in Europe for over a decade. On account of a decision from the European Commission in 2002, lead weights were banned in order to decrease pollution by lost weights. They were removed little by little which is the reason for the lack of fallen of weights at the European roadsides. Similar initiatives and decisions have also been implemented by some of the United States. However lead weights are still used in the most parts of North America.

Back at the time lead was very popular due to its high density as a heavy and yet elastic material. However this attitude changed very quickly after some scientists’ discovery about its harmful properties for humans and nature.

Zinc balancing weights are most commonly used in Europe today. They are recognized by their acronym “Zn”. They quickly became popular as an environmentally friendly alternative in 2002 after the ban on lead weights. Their weight can be up to 60 grams. Zinc weights are larger than equally heavy lead weights because of their lower density. During their first introduction this led to some breakdowns and damages to chassis and brake systems.

In the meantime, zinc weights like the ones from RP-TOOLS can be easily attached and removed from any tire with the help of modern balancing machines. There is thus no further obstacle for a safe and pleasant drive.

Steel balancing weights are another alternative. Their acronym “Fe” is often stamped in on the weight’s side. This type of material is known for its enormous temperature resistance. Their main disadvantage however is the material’s low elasticity, which can lead to easy breaking and create a more difficult formation process for the adaptation on the rim.

Steel weights are often covered with a zinc coating to prevent the corrosion of the aluminum rim and the weight itself, which is often caused by electrochemical stress. Similar to zinc, steel also has a lower density than lead. This type of weight is larger than a lead weight with the same mass in comparison.

There are many other materials from tungsten to tin, which are suitable for the production of balancing weights due to their high density. However, these substances are more expensive in their degradation and production and that is the reason why Zinc and steel weights are the most commonly found balancing weights on car tires these days.